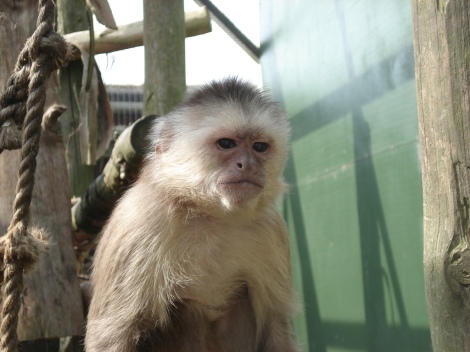 This monkey is totally judging you. Photo: Marion O’Sullivan

…and it’s very disappointed in you.

If you thought a monkey would never judge you for being selfish or unhelpful, you thought wrong. Researchers at the University of Stirling in Scotland tested the capuchins’ sense of fairness, not when it involved them, but when they watched a third party interaction. Though studies have shown that certain primates recognize when they aren’t getting a fair shake, researchers didn’t investigate primates’ responses to a social interaction as strictly the observer.

To test the monkeys’ reactions, researchers had them watch an interaction between two actors. Each actor had a container with three balls in it. One actor would gesture that she wanted the other actor’s balls, then the other actor would either comply or keep the balls for herself. After the interactions, both actors presented the monkey with a treat at the same time. If the petitioned actor graciously shared her balls, the monkey chose the treat at random, but if the actor selfishly hoarded the balls the monkey snubbed them and took the treat from the other actor.

Researchers in the study say this could indicate an important trait that social primates exhibit in the wild. By watching other capuchin monkeys and making judgements, they’re deciding which individuals will be most valuable to social groups. However, more research would be needed, namely in which capuchins would watch other capuchins’ interactions, not interactions between humans.

It could also point to how that trait evolved in humans, a species which, let’s face it, judges its fellow members all the time.