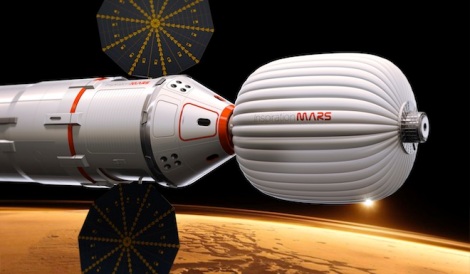 The Inspiration Mars Foundation came out with details about their 2018 mission, and boy, do they have a lot to do before then. The mission, which will send two people around Mars and back home, is planned for the next time the  planet is closest to Earth, something that happens every 15 years. But there’s a few relatively gigantic hurdles to clear by 2018.

Technically, the mission is a relatively simple one: The capsule will blast off toward Mars, pass around the far side, then use the planet’s gravity to slingshot back. The difficult part comes when the capsule needs to land back on Earth moving at about 30,000 miles per hour.

Then, there’s the radiation. The two astronauts on the trip will be in space for approximately 501 days, and space is riddled with high levels of radiation. Astronauts aboard the ISS for extended periods of time don’t feel it, as the Earth’s magnetic field keeps the radiation at bay. But in a small capsule in the blackness of space, people would be vulnerable to all of the ill effects of radiation sickness and could return home with a decimated immune system – if they come home at all. And should a solar flare erupt during the mission, the radiation would be even more extreme (Thankfully, that’s less likely, as the mission will launch while the sun is at the quietest point of its 11-year energy cycle). Currently, there’s no technology available to protect against the radiation in deep space over an extended period of time and thicker capsule walls could even compound the effects.

The proposed size of the capsule is another problem. The two astronauts will be spending a year and a half together in an enclosure no bigger than a parking space. All sense of privacy will be eradicated and frankly, things could get a little tense. To alleviate that problem, the mission’s planners are suggesting that the two aboard the capsule be an older married couple who are used to each other and dealing with problems together. The astronauts will also need to be on a specialized exercise machine for several hours a day to combat muscle degeneration.

Finally, there’s the money. The Mars Inspiration Foundation has some pretty deep pockets courtesy of space tourist and backer Dennis Tito, but not nearly deep enough. NASA has said it may work with the project and provide some funding, provided the federal government gives NASA the budget for it, which could be unlikely with the sequester. If the project needs to develop new technology to ensure the safety of the astronauts and afford the equipment SpaceX is making for it, the foundation will have to find other generous backers… and soon.