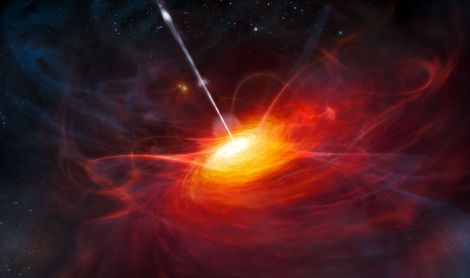 It’s so big, it’s toppling previously-held theories about the nature of the universe. We’ve seen Large Quasar Groups (LQGs) before, but never on this scale.

The celestial object is a collection of 73 quasars, which were the bright centers of galaxies when the universe was still forming and tend to clump together (the reason we can still see them is because they’re extremely far away, and it takes all this time for the light to reach the earth. The LQG mentioned here looks to us as it looked when the universe was only a few hundred million years old. BONUS QUESTION: How old is the universe now?). At its widest point, this LQG is 4 billion light years across. Our own Milky Way Galaxy is 100,000 light years across. Our nearest neighbor galaxy, Andromeda, is 2.5 million light years away. So this thing is huge. Really, really huge.

According to the (previously) held cosmological principle, something this enormous shouldn’t even exist, at least not in our universe. The principle holds that when looked at on a large enough scale, the universe is pretty much homogeneous. This new discovery throws a big wrench in that principle. So once again, the universe does its best to illustrate just how truly microscopically tiny we are.

The LQG was discovered by researchers at the University of Central Lancashire in England through the Sloan Digital Sky Survey, who published their findings in the new issue of Monthly Notices of the Royal Astronomical Society.

Bonus Question Answer: The universe is about 13.7 billion years old, which is when the Big Bang took place. The more you know!