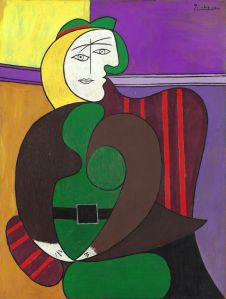 Pablo Picasso means a lot to Chicago.  How many school children have used his giant sculpture in Daley Plaza as a jungle gym, or how many protests and rallies have kicked off under its fan-like face… that is it’s face, right? And that doesn’t even touch on the impressive number of significant Picasso paintings that have hung in the Art Institute’s galleries.

So it makes sense that a city with a legacy for scientific achievement and an affinity for Picasso would combine those two worlds in the pursuit of new discovery.

Scientists at Argonne National Laboratory have worked with the Art Institute to make an unusual discovery. They found that Picasso was the first major artist to frequently use house paint for his art. He most likely used the commercial Ripolin company paint because it allowed for sharper edges in his work. It also dried much faster than oil-based canvas paint, so Picasso was able to turn out more paintings (it’s said that he created over 10,000 during his lifetime).

They uncovered this preference using one of the most powerful X-ray machines in existence; the Argonne’s Advanced Photon Source (APS) produces the brightest X-ray light in the Western Hemisphere. So how does that help? The X-rays allow scientists see the paint at the molecular level, so they can uncover the makeup of the paint. To see exactly how that’s done, check out the Chicago Tribune’s video with Argonne physicist Volker Rose.

The Art Institute will be unveiling some other scientific discoveries about pieces in their collection tonight at 6 p.m. at the Illinois Institute of Technology, in connection with Chicago Ideas Week.