Anyone who knows me knows I’m a massive Pixar fan, so you’ll have to forgive this reference…but the latest findings by the U.S. Energy Information Administration (EIA) kind of reminds me of a scene in “Kung Fu Panda 2.” Po and his pals destroy one war cannon only to find that there are hundreds more… pointed directly at them.

Our meager reduction in coal use and carbon emissions is great and all, but its effects are only a few ripples in a vast ocean. Because while we may be, however slowly, turning around our own love affair with fossil fuels, there’s not much we can do about the emissions of other countries. Which is why the EIA’s graph is so disheartening. 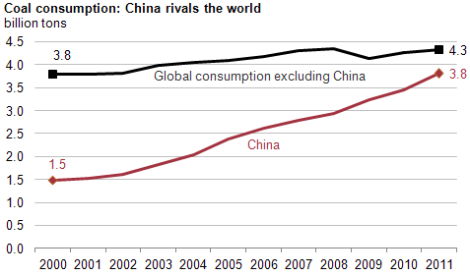 China accounts for 47 percent of total global coal consumption. That means it’s burning nearly as much coal as the rest of the world combined, and it’s showing now signs of slowing down.

According to Time magazine, the reason is relatively simple: Money. Coal is cheap and China is still a developing country. That means our only chance of stemming this tide is making huge leaps forward in green energy to make it as accessible and cost-effective as fossil fuels, which, unfortunately, won’t be for many years to come.