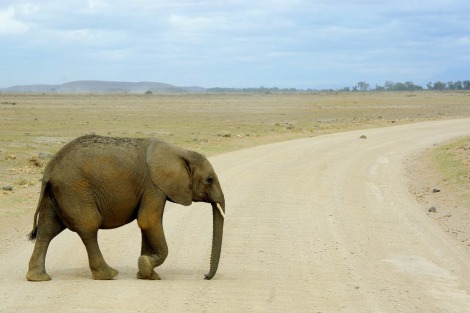 In storied reserves like Kenya’s Amboseli National Park or South Africa’s Kruger National Park, elephant populations have been studied for decades. But reserves Samburu and Buffalo Springs in Kenya are just emerging from the first long-term study on elephants there, and the results are unsettling.

Researchers led by Colorado State University wildlife biologist George Wittemyer followed the 934 elephants living in the parks starting in 1997, and found that an invasive species is having a profound effect on population numbers. In 2000 across the two reserves there were 38 males over 30 years old. By 2011 there were 12. Almost half of the females over 30 died between 2006 and 2011, and 10 of the 50 family groups had been eradicated completely. After looking at all the numbers, researchers found that 56 percent of the elephants that had died were killed by the invasive species.

So what is this highly effective killing machine? Basically, men with guns. Poachers had been overrunning the populations in Samburu and Buffalo Springs so heavily that their take was having a heavy effect on population dynamics, with older elephants being targeted the most for their large tusks. Before the poachers started more intense sweeps of the reserves, males made up 42 percent of the population. By 2011, that fell to 32 percent. Some family groups were left without adults, so juveniles either tried to join other families or followed their oldest sister in a smaller, more vulnerable family.

There is a very thin silver lining; Wittemyer says the elephants have recently gone through a baby boom in response to the poaching. Unfortunately, that only further illustrates the many empty spaces left open by the poached elephants.