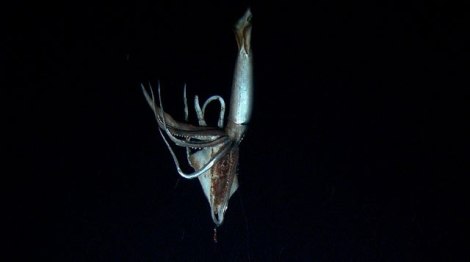 Despite their size, giant squid aren’t easily caught on camera. The creatures live in the darkest depths of the ocean and have remained largely elusive to scientists.

That was before the six-week expedition off the coast of the Ogasawara archipelago in Japan. Researchers sponsored by the Japan Broadcasting Commission (NHK) and the US Discovery Channel tried a new approach to capture footage of Architeuthis dux, deploying a specialized camera system called Medusa, which is suspended 700 feet below the ocean’s surface. The camera used a low, red light to film the animal, since most deep-sea denizens can’t see wavelengths that long.

A fancy camera doesn’t solve the problem of finding and attracting the squid for their close-up, but the prospect of a meal might. Many deep-sea creatures exhibit bioluminescence, a way of creating their own light. Research has shown that when a bioluminescent animal is under attack, it lights up brightly as a kind of alarm. When giant squid see this, they come to prey on the predator.

Using this logic, researchers kitted the Medusa camera out with a device that mimics bioluminescence, and sure enough a four meter-long giant squid arrived to check it out and even attacked the camera, assuming it was food.

You can see more footage of the squid taken during the expedition when the Discovery Channel airs a documentary next month.