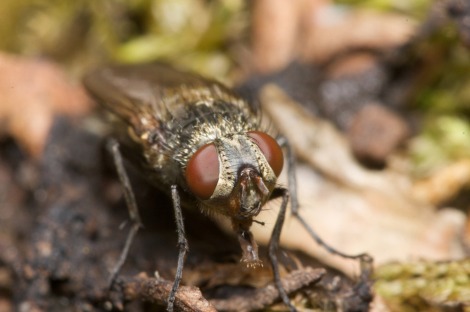 Researchers are now turning to flesh-eating flies to get a better idea of the numbers and species of mammals in more remote areas. Scientists at Robert Koch Institute in Berlin discovered that the fleshy meals of carrion-eating insects like blowflies stay relatively intact in their unsophisticated digestive systems, along with their prey’s DNA. It happened by accident; the researchers were seeing if the flies could carry the anthrax bacterium after chimpanzees in Côte d’Ivoire started dying of the disease. Instead of anthrax, they found genetic material.

Now the researchers are putting out traps with raw meat, capturing the flies and dissecting what’s in their guts. Through the digested food, they identified 16 different mammals living in Côte d’Ivoire, including an endangered antelope whose numbers have dwindled to 3,500.

Researchers believe the new technique will be very useful with animals that are hard to find. Only 44 bodies of the thousands of gorillas that died of the Ebola virus outbreak in the Republic of Congo and Gabon a decade ago were ever found. By sending in flesh-eating flies to do the collecting, researchers think they might have more luck in watching populations and preventing another epidemic.

Another animal known to harbor the DNA of it’s prey are leeches, which also keep the genetic structures in better shape. However, leeches have a more restricted habitat; flies can, well, fly where leeches can’t.