Next month, the United Nations’ Intergovernmental Negotiating Committee (INC1) will meet in Switzerland to discuss mercury pollution and regulation. Researchers at the Coastal and Marine Mercury Ecosystem Research Collaborative (C-MERC) are way ahead of them.

Seventy scientists contributed to a new report on the oceans’ mercury levels, how the element gets into the water, and more importantly, how it makes its way into the food chain. According to the study, mercury contamination near the ocean’s surface has doubled over the past 100 years, and yes, it is our fault. Researchers found that the mercury boom is mostly a product of emissions from burning fossil fuels. Here’s the whole rundown, flowchart style: 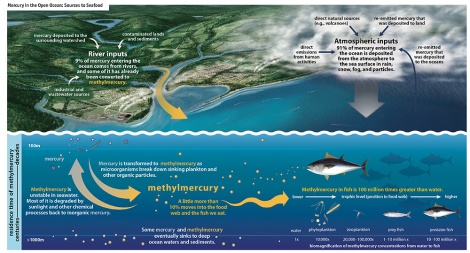 The scary thing about mercury consumption isn’t what it can do to our own bodies, but what it can do to fetuses in utero. Pregnant mothers exposed to mercury poisoning from eating a contaminated fish can mean a host of developmental problems for their unborn baby.

On top of that, mercury has been hard to track. We know that it’s best to avoid fish at the top of the food chain, like tuna or shark, but until now the element’s movements have been largely a mystery.

Those at C-MERC want to make the cycles clearer. For example, they found that a 20 percent cut in atmospheric mercury would lead to a 16 percent decrease seen in seafood. While this doesn’t solve the problem, it does show a promising cause and effect scenario for cleaner seafood.

While it’s more the season for roast turkey (or Tofurkey) or ham, C-MERC also came up with some info on which fishes are the safest to eat.