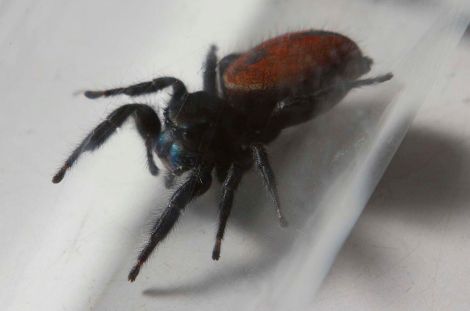 Nefertiti was a spider that boldly went where only a few spiders went before, so it’s safe to say she had a pretty full life. The 10-month old “Johnson jumper” died of natural causes yesterday.

While Nefertiti wasn’t the first spider sent into space (Arabella and Anita were the first, and died on the International Space Station in 1973), she was the first jumping spider to experience weightlessness. She was sent to the ISS in July to see if she could adapt her hunting practices to zero gravity, and the clever spider did. After 100 days in space, Nefertiti returned to Earth, where she was housed at the Smithsonian Institution’s National Museum of Natural History and re-adapted to hunting with gravity.

The name of an Egyptian queen is a rather grand moniker for a little spider, but it’s not without reason. Eighteen-year-old Amr Mohamed from Alexandria Egypt submitted the experiment idea through a YouTube Space Lab contest, and Nefertiti was named in his honor.

Nefertiti had a full life by physiological standards, too; the typical Johnson jumper lives up to 12 months.