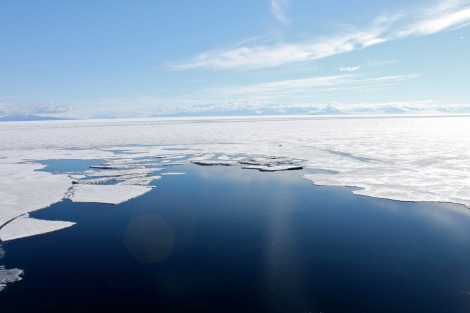 Twenty-seven meters below the surface of east Antarctica isn’t a place you’d expect to see life, but researchers have found lots of it. Not only is the salty, negative 13 degree, oxygen-free Lake Vida teeming with bacteria, it’s been there isolated for 2,800 years.

Scientists from the UIC and the Desert Research Institute in Reno believe the bacteria survive by metabolizing hydrogen and nitrogen oxides. These extreme bacteria are remarkable in and of themselves, but what they suggest is even more remarkable. Researchers posit that if life can survive in the less-than-cozy reaches of Lake Vida, they could potentially exist on other planets that have or had water, such as Mars or Europa, a moon of Jupiter. While the bacteria’s existence don’t make life outside Earth any more likely, it does give scientists reason to hope.

It also points to the extremities to which life can be pushed under the influence of evolution. Research co-leader Allison Murray from the Desert Research Institute says the highly unique environment was probably a driving force in what led the bacteria to feast on hydrogen and oxides without oxygen or light.

Next up, researchers will be drilling three kilometers below the surface of Antarctica to lakes Ellsworth and Vostok, which are equally inhospitable and cut off from the rest of the Earth for millions of years. If life can survive there, that broadens the horizons even further.