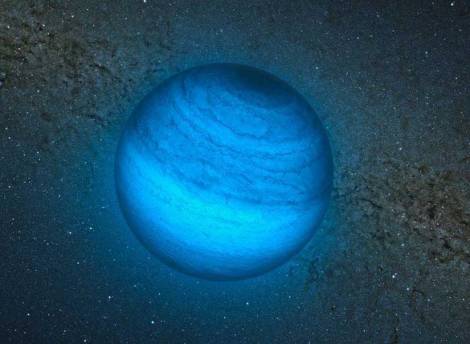 Three Dog Night were really on to something. But then, you wouldn’t say that 12 is the loneliest number… that just wouldn’t make sense.

In any case, planet CFBDSIR2149 must really feel what that song is all about. Astronomers just discovered the gas giant floating about 130 light years away out in space all alone, without a sun or fellow planets.

While orphaned planets may not be uncommon, they’re pretty hard to spot.  Astronomers can’t actually see the planets when they’re so far away; instead they look for the evidence of the planet’s existence. That means looking at the transit of its star or the slight motion of its parent star caused by the orbiting planet’s gravitational pull. If a planet has no parent star, there are fewer methods of spotting it. CFBDSIR2149 was found by pure chance – researchers were looking for brown dwarf stars (which is actually misleading. Brown dwarfs are too small to technically qualify as stars, and too big to be planets). Since CFBDSIR2149 can’t actually be seen, researchers looked at its infrared emissions to tell what kind of planet it is, its size and its age – gaseous, about four to seven times the size of Jupiter, and between 50 million and 120 million years old.

So how did CFBDSIR2149 start leading the bachelor’s life? It was either born that way, with minerals and gases coming together in the darkness of space, or it was some how shaken loose of its orbit around its original parent star. Either way, it’s pretty sad.

This isn’t to say that CFBDSIR2149  is meandering the universe aimlessly. Astronomers found it moving along with a group of very young stars. And orphan planets, also known as rogue or interstellar planets, often orbit the gravitational center of their home galaxy. So you could say that the rogue planet is just broadening its horizons with its friends.