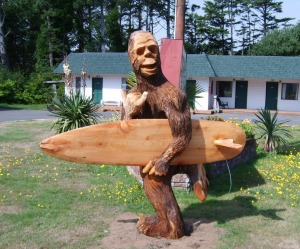 Oh, it’s a real thing (or it will be), and we would have loved to be a fly on the wall in this pitch meeting at Idaho State University.

Resident anthropologist Anthony Meldrum is looking for Bigfoot, and needs $300,000 to do it. Meldrum finally has permission from the university to go ahead with his project involving a blimp searching the woods of the American northwest for the missing link, but he has to come up with the funds himself.

Meldrum wants to build a remote-controlled blimp equipped with a thermal imaging camera. The idea isn’t his; a man named William Barnes who says he saw Sasquatch in northern California in 1997 came up with it, and now the two are working together on what they call the Falcon Project.

Chances are this unconventional research plan will get unconventional funding as well. Meldrum says he’s been approached  by two cable networks willing to fund the expedition in exchange for reality series rights.

So if Bigfoot is found, you won’t see him on the nightly news. It’s more likely he’ll be on Bravo with the cast of Real Housewives of New Jersey instead.