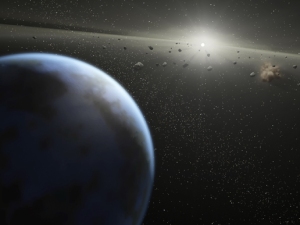 Did you enjoy that alliterative title? Thought you might. But finding other intelligent life forms that would appreciate literary quirks is looking less feasible. And the reason is asteroids.

The thought of species-destroying asteroids colliding with Earth is enough to make anyone quake in their boots, but the reality is we probably wouldn’t be here without them. Near-apocalyptic conditions opened up whole swaths of niches for the survivors, allowing evolutionary adaptations to charge forward in a fight to endure new environmental factors – a phenomenon called punctuated equilibrium. Had an asteroid not wiped out the dinosaurs, our mammalian predecessors would not have inherited the Earth.

So it stands to reason that our solar system’s asteroid belt, located on an orbit between Jupiter and Mars, was instrumental in our development of intelligence, as would similar belts for planets possibly housing life as well. At least this is according to the new hypothesis put forward by astronomers Rebecca Martin of the University of Colorado in Boulder and Mario Livio of the Space Telescope Institute in Baltimore.

Added to that, Martin and Livio posit that there’s another factor that determines where our asteroid belt is: Our system’s gas giant, Jupiter. When the solar system was forming, Jupiter shifted slightly closer to the sun, intensifying the pull between both bodies. Any planetary or rock formations in orbit around the area of the current asteroid belt would have been pulled apart by the opposing forces. The belt also exists at the “snow line,” area around the sun where ice begins to form and bind rock together. As a gas giant, Jupiter would need these colder conditions to form at all.

This cocktail of factors makes the ideal conditions for intelligent life pretty remote: Less than four percent of exoplanet systems that we know of have this setup. It looks like E.T. won’t be visiting any time soon.