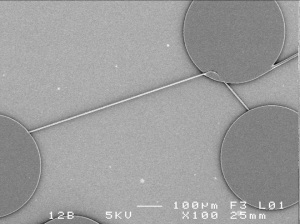 If Charlotte the spider were more than a children’s book character, she might one day be able to get a job in Silicon Valley.

That’s because scientists and tech researchers are exploring the uses of spider silk in electronic and medical gadgets.

A strand of spider silk can carry light just as well as a fiber optic cable, as physicist Nolwenn Huby of the Institut de Physique de Rennes in France discovered. Her team experimented sending signals through the silk strand to photonic chips. The light signal carried from chip to chip, though some of it was lost along the way. Huby says this problem could be easily remedied with a kind of coating on the outside of the silk.

But why would silk be more useful than glass? First of all, it’s a remarkable material. It’s incredibly strong and tough, while remaining flexible (We’ve all seen Spider-Man, and we know why he’s called “amazing”). Secondly, it’s biodegradable. Cell phones and other electronics that get thrown away would be less harmful to the environment if they had guts made of spider silk.

The biodegradable aspect is where medical science applications come in. Spider silk is incredibly thin, about 10 times thinner than human hair. If it can be used in fiber-optic imaging, it can help doctors see places inside the body with smaller incisions. Doctors also don’t have to worry about removing the silk, since the body will dissolve it naturally and harmlessly.

Biomedical engineer Fiorenzo Omenetto of Tufts University in Somerville, Massachusetts has yet another application in mind for biologically-harvested silk, this time from silkworms. Omenetto is working on the idea of an electronic silk bandage left inside the body that can look for infections after surgery, then later dissolve.